When my family used to run out of money we would cut back on luxuries, not have holidays or new clothes, eat basic food and skip pudding. We would never start economising by cutting out food altogether, switching off heating or water, they would be the last things to go. Yet when this country faces trouble the Tories cut healthcare, elderly care, free dentistry, benefit payments – so they can still give tax-breaks and corporate subsidies. It’s the same as sacrificing food for the sake of a fur coat – and yet the whole country accepts this as ‘economic wisdom’, a necessary evil. 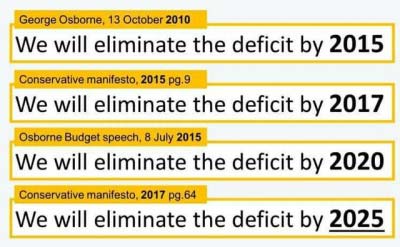 If the Tories are so good at economics, why has austerity not reduced the deficit at all?

No matter how many facts contradict this idea, we just dismiss them and accept austerity. We watch MPs eat £25 breakfasts at the tax-payers expense while celebrities jet round the world – and accept our poverty wages because ‘there’s no money’. It is a refusal of the truth which looks much like some very dark times in our history.

This election is similar to ancient arguments about the Earth being at the centre of the Galaxy. Religion relied on the idea that it was the Earth at the centre, with the sun revolving round us. Proving otherwise would have threatened the religion and its power over the people. Therefore the religious powers attacked and undermined people who said that the sun was at the centre of the galaxy (much like Boris now bans the Mirror and attacks CH4 – dictators want to silence opposition).

For decades people got burned to death as heretics, including some of the finest minds of the time such as Galileo, (similarly Javid dismisses a Noble Laureate economist who warns against Brexit – experts are now debunked and not listened to). Meanwhile religious orders knowingly spread the lie to keep the Church in power (just as Tories lie that austerity is essential, Corbyn a terrorist, Labour spending is reckless). They had a great deal of help from those who benefitted from the church (just as Tories have help from billionaire owned media, Russia and wealthy corporates). 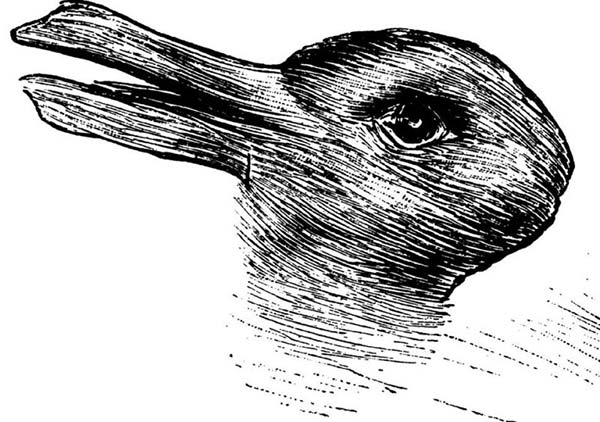 If you want to disable the public, get them to fight over whether this is a young woman looking away (Leave), or an old woman looking left (Remain). They will forget that it’s just a drawing – not a real thing at all (The whole of Brexit is a con).

The argument was never about truth – only power. Long after it was known that the Earth rotated round the Sun, the church still taught differently. Meanwhile the sun didn’t give a crap what we thought – reality was affected not one atom by our beliefs.

Today money has replaced religion but the game remains the same. Now people try and tell us that billionaires create jobs, that the poor benefit from the ‘trickle down effect’, that large corporations mean more jobs, more choice, cheaper goods and basically joy all round. It is total horse shit, but like the Earth being the centre of the galaxy, the lie is told over and over, and people are persecuted if they try to show the truth (Corbyn smear campaign anyone? Oh, everyone who’s wealthy… well that is a surprise.) 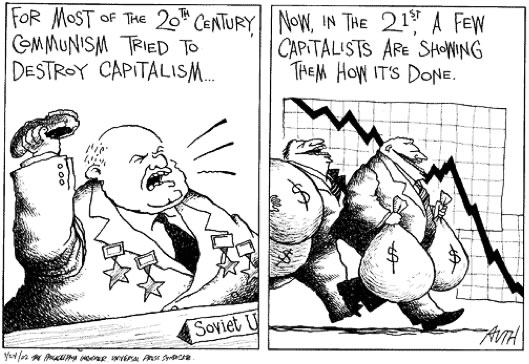 Billionaires create poverty, by driving down wages and buying governments so they can deregulate, remove workers rights and increase profits. That’s why so many wealthy people are giving money to Trump and Johnson.

Thanks to reality we eventually had to accept that the Earth revolves round the sun. Likewise, at some point we have to accept that Conservative politics and wealth capitalism destroy their parent countries.

To show how this works we can look at the two systems. First, it should be understood that many corporations do not make huge profits (or even just survive) through their own excellence or hard work alone, they get government subsidies. Where you or I would go out of business if we lost money, the government props up some businesses that are failing. The theory is that we need some businesses which can’t make a profit – such as initiatives to develop green solutions to the climate crisis. In practice, the government misuses subsidies to pay ‘friends’. They give subsidies and tax-breaks to the company, the company give huge donations to their party.

Recently the Tories cut green subsidies – yet they give £6bn in subsidies to fossil fuels. While we often get angry that it costs £7.2bn in ‘handouts’ to pay benefits – it costs many times more to subsidise corporations – and we are told this is ‘essential’.

When I talk about Corporate Breaks, I mean a combination of tax-cuts for high-earners, tax-breaks for corporations and subsidies. It’s a metric tonne of money.

Basically, under this model a small number of people own a lot of businesses. We’ll take Tesco as an example, but it’s true of many others.

Tesco is owned by Norges Bank, Deutsche Bank, BlackRock, Schroders. Of these only Schroders is British, although it operates worldwide.

When Tesco sell something, the profit goes to Norges Bank (Norway), Deutsche Bank (Germany), BlackRock (America), Schroders (Britain and global) – and their shareholders.

In other words the profit does not stay in this country.

To make more profit Tesco buy cheaply. This means poverty earnings for many suppliers, especially abroad where they are not protected by regulations. You can produce goods all day for penny wages, because Tesco has so much buying power you cannot refuse them – Tesco have also driven out other buyers, who would pay fair prices.

Another way to increase profits is to keep wages low. It is true that jobs are created and thousands of people get paid – but assuming a wage of £10 per hour they’d each have to work 250 hour weeks with no time off, ever, and never spend a single penny of their wages for at least 9,718 years in order to become a billionaire (*1). And we know very well that most are not paid £10ph but much less.

On the other hand, shareholders, CEOs and business owners take profits from every store in the world and become obscenely wealthy while not having to work at all. Of course some wealthy people do work, they may even work long hours, but they do not do more valuable work, or more skilled work than others.

Over time so much wealth is taken out of the country that we don’t have enough left to pay corporate breaks and pay for social care (NHS, Benefits, Elderly care etc.). The Conservatives are from wealthy backgrounds and money is their primary interest. Therefore they sacrifice social care in order to pay the corporates.

But money still leaves the country and so there is always less and less of it. To get more money you would normally export goods. The UK don’t make enough goods any more so money has to come from somewhere else. The Tories have raised money by selling Royal Mail, British Rail, British Gas, British Leyland, British Steel, British Airways, British Aerospace, Rolls Royce, National Express, Water and BT.

Sadly this is a short-term solution with massive problems. First, we now have even less to export, so it’s even harder to make money. Second, profits now go abroad again. For example, where British Steel used to pay money into Britain, it was bought by a company in India (and maybe Turkey next), so now the profits again leave the country.

The NHS is the last thing left we can sell, which is why it’s not just obvious, it’s essential that the Torys will privatise it. After this the money will run out and we may have to get rid of social care of all kinds. But by then the Tories will have cemented their power and we will be unable to do anything to stop this. It will be beyond repair.

This is the unspoken reason for Brexit, even more important than tax evasion. Under the EU the government simply would not be allowed to remove social care, or decrease wages below poverty level, or buy cheap ‘slave labour’ goods – EU regulations protect our businesses and workforce from such exploitation. But with all our industries sold off, there’s nowhere left for Tories to raise money – so they have to escape regulation in order to cut the poor off. If you don’t care for the people you don’t have to pay for care – problem solved.

The essential difference with socialism is that it nationalises instead of privatising. This means that businesses like British Rail and British Steel bring money into the country instead of sending it out. The country owns these businesses and therefore the country takes the profit (*2).

This profit can be used to invest in more businesses in the UK, and helps relieve the tax burden. The profits also help pay for things like Social Care. 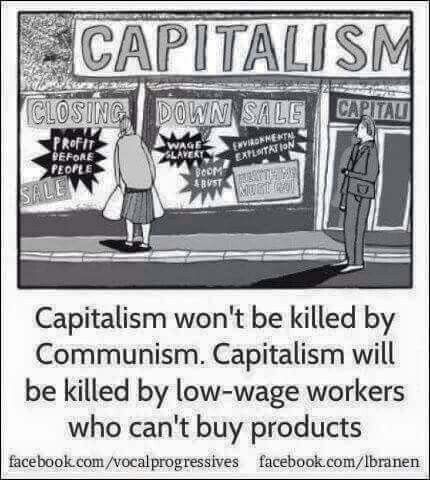 If Tesco was owned by the government, all the profits would support the UK; they would be subject to a minimum wage and therefore pay would be fair and easy to live on; cost of goods would be regulated so we wouldn’t be ripped off. There would be a wage and bonus cap so CEOs couldn’t bleed the company dry. Tesco wouldn’t put shops everywhere it could, just in enough places – leaving room for local traders who would otherwise be driven out of business.

It is true that prices would rise, because we would buy goods at fair prices. However, since wages would also rise, and other costs would fall (like broadband, electricity, rail etc.) – overall we would be financially better off. We would also have free dental, NHS, eye care and more, both saving money spent on healthcare and reducing the need for insurance.

Rich people object to this model because it doesn’t create billionaires. Instead it creates a fairer distribution of wealth, which rich people seem to really hate. Money is made more slowly, but it’s sustainable – rather than the boom-bust of wealth capitalism or the trend of huge bonuses followed by the collapse of the business (Thomas Cook, BHS, The Banks…)

We have been told repeatedly that there is not a magic money tree. Yet somehow there’s always enough money for corporate breaks, Brexit disasters, wars etc. 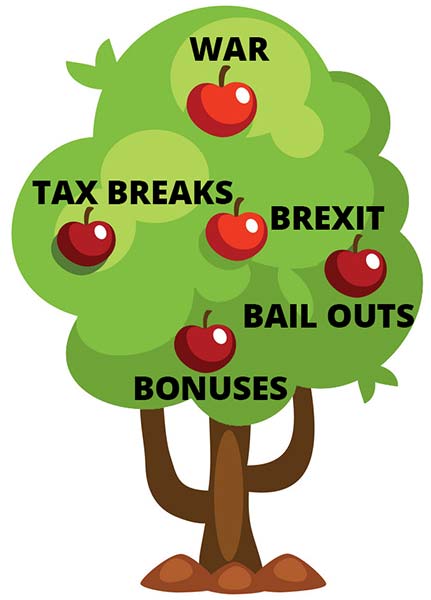 THE TORY MONEY TREE DOES EXIST It just looks like this. 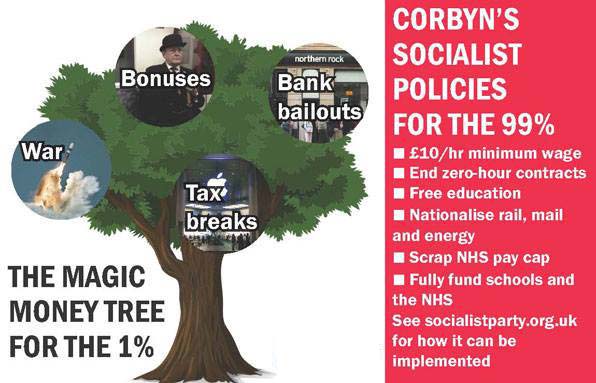 People don’t believe Labour can raise enough money through tax, because people have no idea how much money we piss away in corporate breaks.

Of course the socialist model is not perfect – because people make it and people are not perfect. However, what is vital is this:

When Conservative capitalism fails people die, austerity measures are brought in, hospitals close, benefits disappear, yet the wealthy keep getting wealthier. Rather than looking after essentials like healthcare, Tories look after the wealth of the wealthy by taking all support from the poor.

Where the Socialist model fails we may have to pay more for goods for a while until we work out how to fix things.

I know which I would rather have.

Let me manage the technology, while you take care of business

Riding the waves of neurodivergence