Well, hi everyone. It was awesome of RoS to invite me to guest blog. I’ve got about 3,500 blogs of my own, but Dad says I can’t tell anyone it’s really me. He’s totally uptight about that sort of thing.

I keep telling him the whole “proof denies faith” stuff is so old, but he doesn’t get it.

Anyway, I guess I should set a few things out, being as this is my one chance to be openly me.

Most people are gonna think that my other Blogs are those real fire-and-brimstone numbers, or the one’s which keep posting bits of scripture and stuff right? But they are so not.

See, if you know you exist it doesn’t make sense to argue with someone about it. If they don’t believe you, it’s okay, you just gotta shake your head and hope they get it some day.

I don’t cry hell and damnation for the unbelievers either, I mean, hello! Compassionate God, duh. If Dad had made everyone with ‘belief’ chips or ‘auto-nice’ or something then being good or faithful wouldn’t mean anything. You have to be able to fail, right? So then what kind of parent would throw their kids out into the world with nothing but some barely comprehensible and mostly boring handbook, and then lock them in a fiery oven if they ever made a mistake? Wow. If that’s how you feel about God you ‘aint got religion, you got serious issues.

To all those self-righteous idiots who keep trying to convert other people to their religion, their view of God – SHUT UP!! There’s a reason I said you all find a personal relationship to the divine – you all do it your own way, and Dad isn’t going to burn anyone, even the mean ones, because he’s a nice guy, okay! Life is hard, that’s why He gave you forgiveness.

Not that you use it.

Don’t expect me to quote the bible here either, that’s another myth. When I came down I handed out some advice; then some guys saw a chance to get power and turned my advice into rules, then laws, then religious demands and dogma.

How would you feel if your parenting advice got turned into worldwide law every time you spoke? You’d shut up pretty quick right?

After a while people started massacring each other and saying God told them to do it. By now nothing of what I’d really said was left.

Makes the Bible look pretty weird doesn’t it. Love every one. Now kill every first born son. Now die of locusts. But be forgiving and loving, okay!? No wonder you people got confused.

So I’ve got some advice to try and put right what some greedy priests messed up two-thousand years ago.

That Bible you have there? Burn it.

I mean seriously, you don’t need it. You can distill it down to one sentence and that’s all you need.

“In all things, come from a place of love.”

There you go – no fishermen, no dead babies, no prophets – and no way some corrupt or stupid bishops can use this to enslave you in dad’s name.

The rest of the Bible is so old and out-of-date now it barely makes sense.

I mean, honestly, you really think God’s word came out all those centuries ago and just froze? Just turned to immutable rock? What is it with you people that you call Him infinite and then turn him into an idiot with all your failings?

His word is life, okay. That means it changes. The essence always remains, “Live through love”, but the signs have to change with the times – your children need their own stories, their own words and tales. That’s the trinity. Father, the universe, Son, the love, Holy spirit – the ever changing message that carries forth that love.

And just so you know – It could be Mother, Daughter and Holy Spirit – Dad and I are actually gender neutral.

So burn the damn book. It was always rubbish – my good intentions turned into a tool to suppress the masses. If you’d all spent half the time on living in love as you have arguing about interpretation of scripture you wouldn’t be in such a mess today.

This is my lesson for you in the twenty-first century.

Life is simple. That doesn’t make it easy, but it does keep it obvious.

Life is simple. Even so, sometimes it requires great effort to live in love. The Big Answer will not lead to a life of endless and effortless happiness. I cannot tell you how boring and stagnant that would be. The Big Answer will only enable you to accept that Love is as much work as Hate or Fear – it’s just that the wages are the best around – always.

Life is simple. It’s only when you refuse to do the hard work that you make life difficult.

Like the bible. If you’d just said – “hey, we should be nice to each other,” things could have been so good. Instead you all wanted to keep your money, your power or your privilege. So you embellished the message and then argued about what it really meant.

Everywhere in life you go wrong, you’ll see that the point where life branched off into bad, that’s where you refused some hard work and tried to go the easy way.

Life is hard. Get used to it. And, more than anything, stop blaming God for everything – he gave you free-will AND responsibility.

Those people who say “if God is loving how did he let this tragedy happen?”. Answer? He didn’t – you did. There are places where earthquakes happen, so what do you do? Build cities there. In places renowned for hurricanes? Build cities. Where there’s a flood risk? Yep, you build cities. And then when it floods or storms or quakes you blame God for it!!

You can’t have what you want. You can’t just breed billions of people, build where you like, spray what you want in the air and pour it in the sea. You have to start living with the Earth, not infesting it. If it’s a storm area, build low domes for dwellings, build eco-homes, keep towns small and don’t do cities at all. But that would threaten your bank accounts and industries, right? So you’ll burn, sure, but once again, don’t blame Dad for it – you do it to yourself.

Oh, and just to sign off. The reason I don’t wish you a merry Christmas is because that hideous festival of greed you’ve turned it into – I don’t even recognise. Maybe you could put away the credit cards this year and have a time of remembrance like it should be.

After all, if the whole planet refused to buy Christmas presents one year, the world economy would collapse and force you to make the change. Interesting how little it would take. 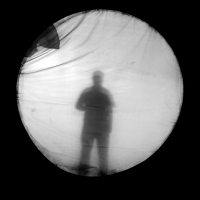 Digital Smithy
Unquiet World
... on being and becoming ...

Welcome to the fishbowl.